Cities and tourist areas around the world

All You Need to Know about Tourism in Georgia

A comprehensive guide to tourism in Georgia and its most important tourist destinations, with information on the most important cities with Safaraq Tourism

The Georgian people, or Kartvelians, are the result of the integration of indigenous peoples with immigrants to the Caucasus from Anatolia in ancient times. Some ancient Jewish accounts state that Georgians are descended from Iberian, also called Tubal.

In the first month of 2004, Georgia adopted the five-cross flag, the flag of St. George. Most of Georgia's population believe in Orthodox Christianity with 81.9%, while Islam accounts for a small percentage of about 9.9% of Georgia's total population.

Georgia is one of the most tourist-attracting countries around the world, with 103 resorts with different climatic regions, more than 12,000 historical and cultural monuments, four of which are classified by UNESCO as World Heritage Sites (Bagrati Cathedral in Kutaisi, Gelati Monastery, Historical Monuments of Mtskheta, and Svaneti). 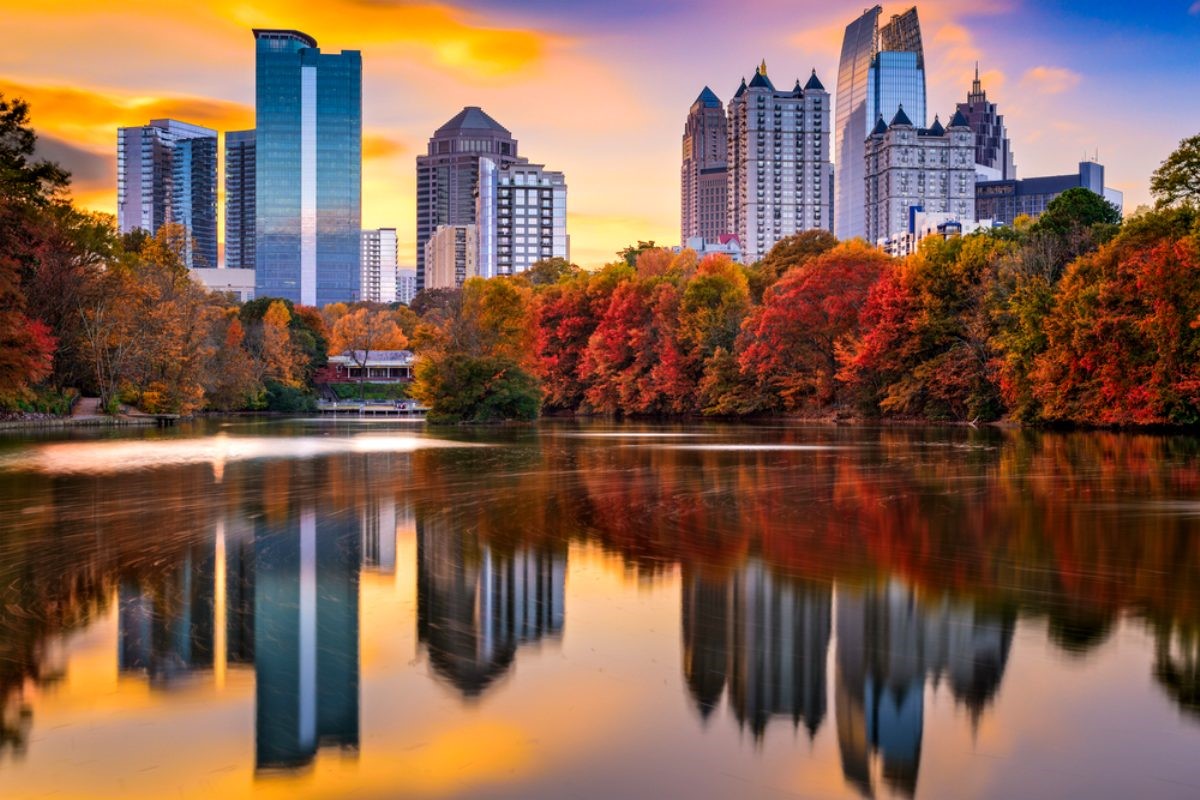 Georgia occupies a strategic position among the world's countries, extending its territory to the top of the Great Caucasus Mountain Range, generally known as the boundary between the European and Asian continents.

Georgia is administratively divided into 12 regions, 69 provinces and two autonomous republics, Abkhazia and Adjara, and is distributed on the Georgian map as follows:

Many mountain ranges (Lekhi and Meskhiti) separating the eastern and western parts of the country often hinder the entry of wet air masses into the Black Sea region. 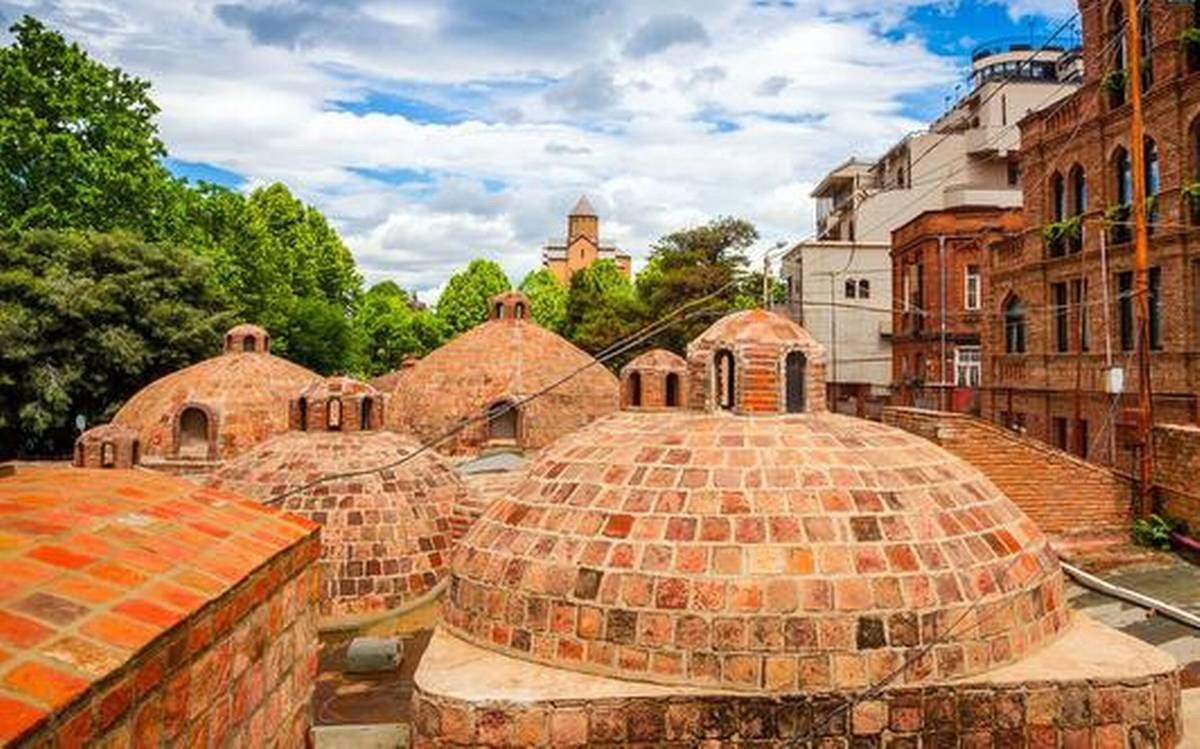 Some of Georgia's most important cities include:

Tbilisi is the capital of Georgia and one of its largest cities, with a geographical location on the banks of the Kura River, with a population of about 1,500,000.

Known as Tiflis, a name derived from the word Tbilisi, meaning in Georgian hot springs, the King of Georgia in the 5th century AD built the city near these hot springs.

Tbilisi has historically been home to people of multiple cultural, pagan and religious beliefs and a point of contention between the various world power groups because of its location at the crossroads between the continents of Europe and Asia, nearby east-west trade routes.

This city has a number of Georgia's most important tourist sites, such as the churches of Sameba, the Classical Freedom Square, the Shota Rustaveli Avenue, the Davit Aghmashenebeli Avenue, Narikala Fortress, the Opera Theatre and the Georgian National Museum.

Tbilisi has a humid subtropical climate with significant continental impacts, and the city experiences heavy rains throughout the year. It is generally affected by dry air masses from (Central Asia/Siberia) to the east and (Atlantic/Black Sea) to the west. 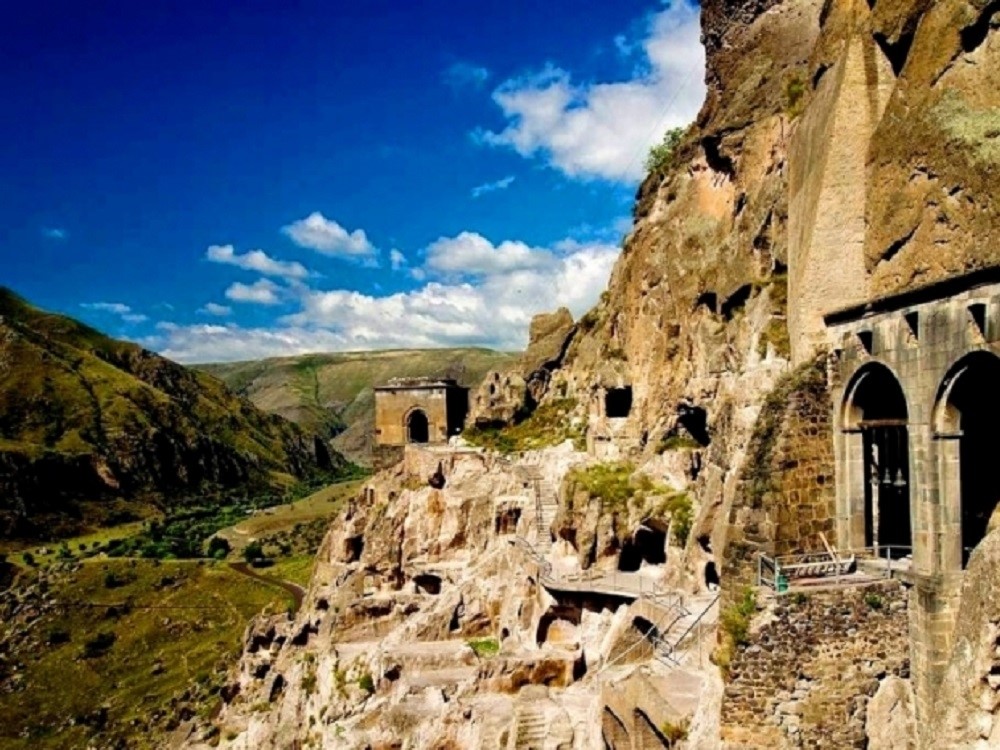 Batumi, known as Batum, the capital of the autonomous province of Adjaria in southwestern Georgia, has a population of about 180,000 and has a central seaport on the Northern Ocean.

Batumi, one of Georgia's most important tourist cities, is a destination for tourists, with its majestic mountainous nature, a magnificent coastal destination, and a number of natural and archaeological monuments, making it Georgia's second capital after Tbilisi.

Some of the region's most important attractions are: 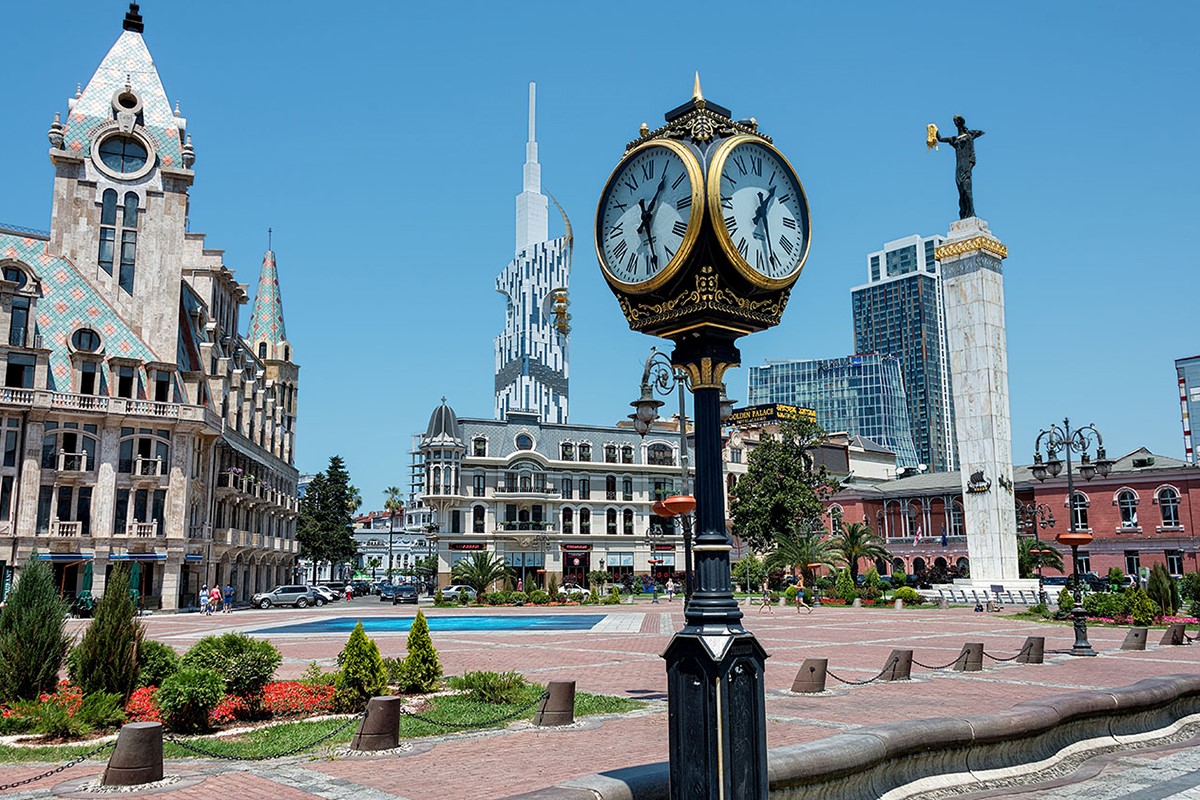 The resort-filled city of Borjomi is located in central Georgia, 160 km from the capital Tbilisi, with a population of 10,546.

Borjomi is one of the most important tourist cities where visitors can enjoy and stroll among the natural beauty of mountains at an altitude of 800 meters. It features healthy water and a refreshing mountain atmosphere for tourists and residents alike.

Some of the most important tourist destinations in Borjomi are:


Kutaisi, Georgia's second-largest city and the main capital of the western region of Imereti, is 220 km west of Tbilisi.

You can reach Kutaisi directly through David the Builder Kutaisi International Airport, about 14 km from the city centre.

Kutaisi has many different attractions, a destination for many local visitors, and a focus for many visitors from around the world, such as: 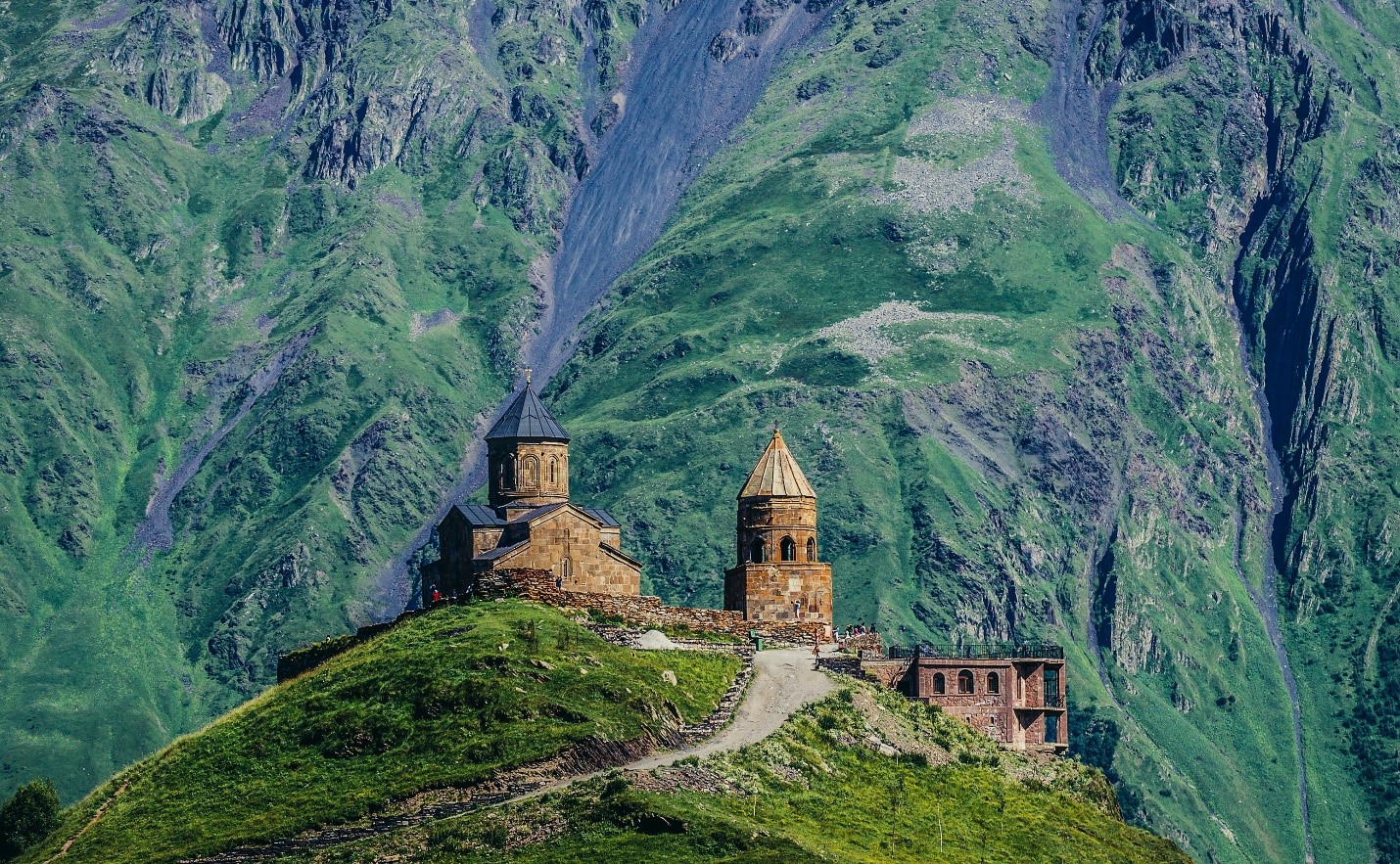 One of Georgia's most famous sulphur baths is the Tbilisi sulphur baths known as the Abanotubani Baths, located in one of the capital's historic and ancient neighbourhoods, specifically on the eastern side of the Kura River.

Abanotubani Baths are the source of hot sulphur springs that have been active for more than 700 years and the most famous baths in the Caucasus region in general.

Tbilisi's sulphur baths are a destination for tourists from all over the world, thanks to the therapeutic benefits of sulphur hot water, which are used to cure many bone diseases while enjoying a heated bath experience.

Some of Georgia's most famous baths include:


Blending charming natural landmarks with famous historical sites, Vardzia Monastery is one of Tbilisi's most important tourist destinations, occupying a privileged position in the heart of the mountains.

The Vardzia monastery, which is one of Georgia's most important tourist destinations, was built at the request of Queen Tamara, who was considering creating a place for the worship of Christians, away from the Mongols and their oppression in the 12th century AD. In response to this request, Vardzia Monastery was built from approximately 13 floors and 6,000 rooms to be a haven for the Georgian Christian people.

The statue of eternal love was designed by Georgian artist Tamara Kvesitadze, whose idea was derived from a book depicting a romantic relationship in 1918. Its content represents figures that move every ten minutes, approaching each other at times to tangle and form the bodies of a man and a woman without clear features, and then walk away again.

Located within the Batumi Bay area, one of Georgia's most famous tourist attractions for young people, the Statue of Eternal Love is made of solid metal steel wire in the form of vicious rings and is approximately eight meters long.

The story of the statue of eternal love called Ali and Nino is traced back to an Azerbaijani aristocratic Muslim man named Ali, who fell in love with Georgian Princess Nino, an Orthodox Christian, but fate divided her. 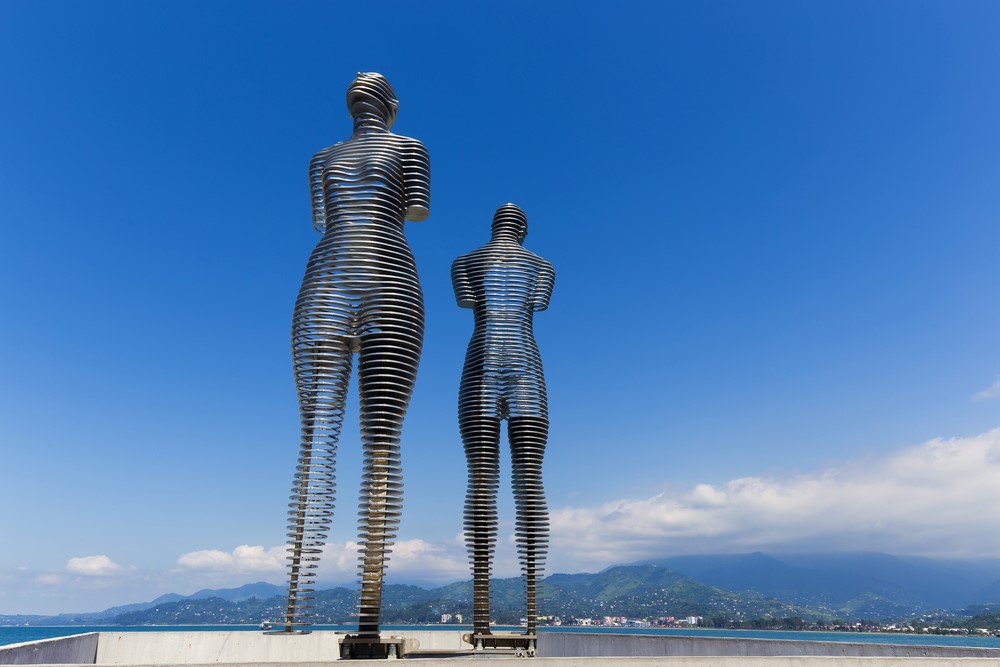 Close to Georgia's most popular tourist sites, the Colosseum Marina hotel is located at a central point in Batumi, the ideal choice for hotel accommodation for those considering tourism in Georgia.

This 5-star hotel in the Georgian capital offers all the comforts and well-being of its guests, including swimming pools, saunas, spas, sports areas and other social facilities.

One of the most important services this hotel provides to visitors is an airport shuttle. You can contact the hotel management, informing them of the arrival date at the airport, and provide them with available contact information.

The hotel strictly applies the standards of health prevention of coronavirus; the staff considers all the necessary criteria such as social distancing, wearing masks, checking the temperature of workers and guests, and providing all means of sterilization to guests.

Guests can enjoy a visit to many attractions available in areas close to this hotel, such as shopping malls, Batumi Beach, the Statue of Eternal Love, and the aquarium. 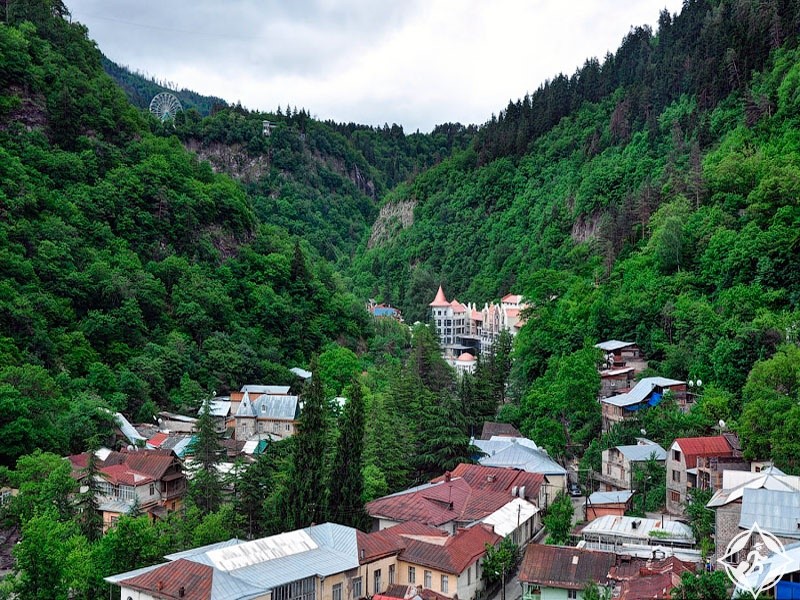 Located in the central area of Borjomi, the 5-star Hotel Rexus offers a good stay in upscale hotel rooms, with charming views of the mountains and greenery around the hotel.

The hotel is surrounded by tourist centres such as Peter Fort, the Borjomi Museum, Merab Kostava's Garden, Borjomi Park, Bakuriani Kids Park, Rabati Castle, as well as many other attractions that impress tourists.

The 5-star Divan Suites Hotel in Batumi is a great choice for tourists in Georgia, with the family atmosphere in its spacious rooms.

Premium and high-end hotel accommodation, integrated services and social entertainment facilities are among the most important ingredients for choosing this hotel in the Georgian capital.

The hotel is a few minutes from the sea coasts, recreational and shopping centres, making it one of the most important places for tourism in Georgia for families. 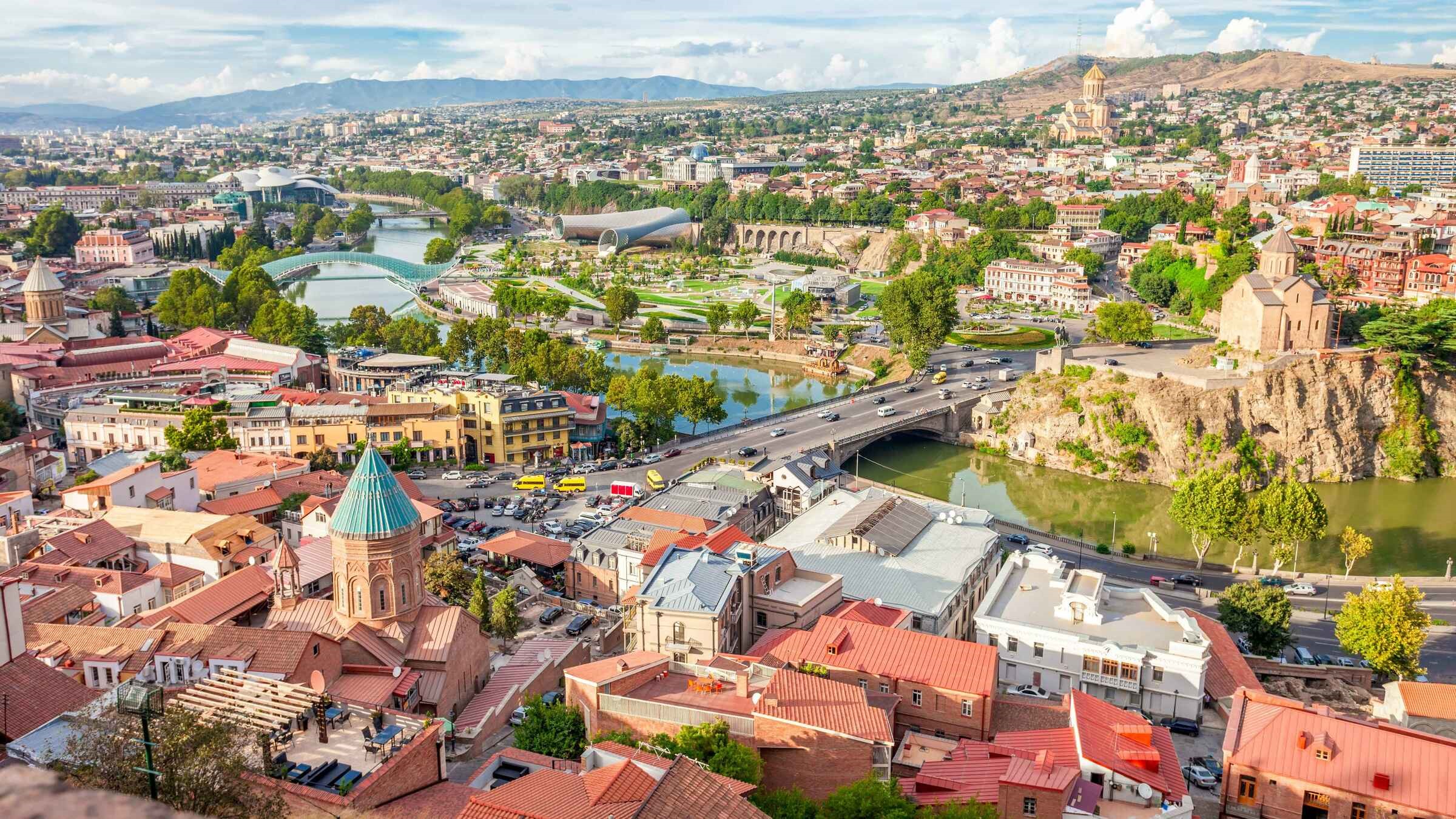 Georgia has a distinct geographical location in the Caucasus region, a meeting point between the western part of the European continent and the north-eastern part of the Asian continent. It is bordered to the west by the Black Sea, Russia and Azerbaijan from the north
and surrounded by Turkey and Armenia to the south.
With the largest population, approximately 1,066,100, Tbilisi is the capital of Georgia, one of Georgia's largest cities, with most state institutions.
Georgia covers an area of 69,700 km2.

Georgia has a population of approximately 4,385,000, with Georgians accounting for the largest proportion of the country's population, distributed as follows:

There are also many small groups in the country.

Many sects and races have inhabited Georgia for thousands of years, such as Azerbaijanis, Abkhazians, Assyrians, Chechens, Chinese, Georgian Jews, Greeks, Kurds, Tatars, Turks and Ukrainians.

Georgia's tourism seasons are related to the country's climate and weather, with December, January and February the coldest in Georgia, while July and August are warm.

Many tourists, therefore, prefer to visit Georgia when the weather is warm so that they can stroll around in various tourist places.

Georgia is one of the most suitable places for nature lovers and a destination for European art and culture lovers. Therefore, tourism industry experts believe that tourism costs in Georgia are reasonable, given that other European countries. Tourists must take into account the costs of:
Room rates at Georgia hotels vary depending on the tourist season and other year periods, with standard room rates ranging from $100 to $200.
Georgia is an independent state with a security system that relies primarily on providing
security and safety to residents and tourists alike. Security and police officers work day and night patrolling public places, so there is a great sense of comfort and safety for tourists during Georgia's tourist seasons.

A Comprehensive Guide for Tourism in Bosnia and Herzegovina

All You Need to Know about Tourism in Zanzibar