Istanbul has witnessed an operational opening at Istanbul's third airport on April 6, 2019. The event that the world has been waiting for years, by launching all operations within the largest airport in the world empowering Turkey's position in general, and Istanbul in particular, as a bridge connecting East with West.

After the successful completion of the massive transportation operation, which was called the Great Migration, the new airport started its first operational day with news, articles, and photos on the Turkish media, how not and it is Turkey's new airport. Besides, some media have described the event as unique and admired this huge edifice, and others began to describe the changes that it will make to the transport sector in the first place and some talks about the positive impact of this airport between Turkey's airports and Istanbul airports ...

Media also started to guide the citizen and the tourist on how to deal with these changes, by answering many questions that come to the minds of those who will use the new airport, including arrivals, departures, farewells, and future. 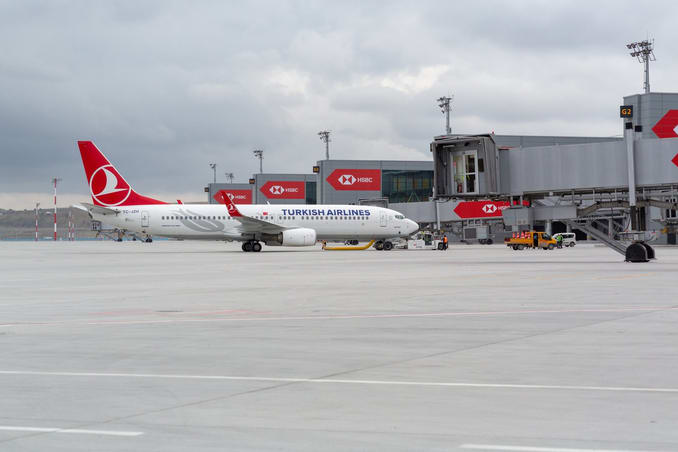 In this context, "CNN Turk" conducted a meeting with the Minister of Transport and Infrastructure, "Cahit Turhan", the most prominent of which was as follows:

In an interview with "CNN Turk", the Minister of Transportation and Infrastructure, "Cahit Turhan", answered questions about Istanbul's new third airport. He also talked about the opening of the new Istanbul airport, noting that the transfer from Ataturk Airport to Istanbul's new airport took place completely and regularly without any slowdown and any problems. It sets a record for being the largest transport operation in the history of global air navigation. "The road that was supposed to be closed for 26 hours was opened within 13 hours, and the other road that was supposed to close 12 hours was opened to traffic within 8 hours. We would like to thank the people of Istanbul who showed great openness during this process" said the minister.

"Now, we do not have specialized units that carry out air cargo operations in the new airport. We have transferred customs and administrative units, and the units will be transferred gradually every two weeks, so Ataturk Airport will continue to carry out air freight operations for a certain period" said also the minister.

High-quality transportation, roads, and the metro in 2020

Minister Turhan pointed out that the most important advantage that Istanbul's new airport has over Ataturk Airport is that the airport line roads leading to it have a very large transportation capacity. "In terms of distance, the new airport may be a bit farther, as it is far from areas such as Bakirkoy - Kucukcekmece - Zeytinburnu, compared to western Istanbul regions such as the areas between Avcilar and Fatih. However, this dimension is not a source of trouble for the Ministry of Transportation, as the opening of Istanbul's third airport was shortly before the adjustment of the road connecting to the airport from Mahmutbey-Odayeri Havalimanı, so that the road became 2x4 dimensions (a two-way road, each direction has 4 lanes). It has been converted to serve smooth traffic-free of traffic problems, and the route between the airport and the Hasdal Kavşağ intersection has also been converted into a road with dimensions of 2x4. However, the roads coming from the west have also been expanded, and in this area, we do not expect any traffic problem compared to the roads leading to the airport 20 years ago" said the minister. 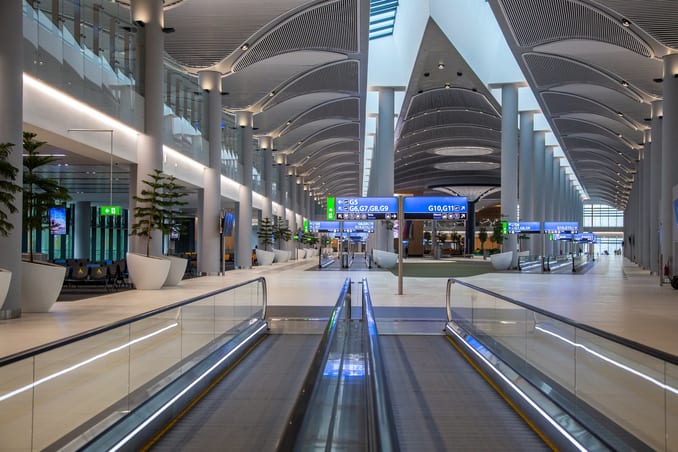 "We will also enter the airport metro line into service in the first half of 2020 so that Istanbul metro line will be from the airport into the city, and it will be 32 km long, and it will end before the coming of June of the next year 2020. Moreover, the duration of the journey on board will be less than half an hour at a speed of 80 km per hour. Havaist will also transport mass transit to Istanbul's third airport site from 20 points in Istanbul and will transport 90,000 people per day through 2,300 shuttle transfers (roundtrip). Also, buses of the Istanbul Transportation Directorate will deliver to the new Istanbul airport site from specific centers 24 hours a day. Taxi services however have also been organized" the minister also said.

English is a requirement for Istanbul Airport Taxi Driver

"The number of taxi drivers who work in transportation at the airport is 660 drivers, and their number will be increased later to reach more than 1000 drivers. However, Knowing the English language has been required for these drivers. In addition, the İGA group, which pledged to establish and operate Istanbul Airport, is overseeing this. Cars are also equipped with special screens that will inform the driver of the best road options, to reach the destination that the passenger chooses to reach, and the passenger can know the number of the car plate as well. He or she will also be able to pay through credit cards. Thus, one of the most important services that arrivals suffer from, which is the integration of the delivery service from Istanbul airport, it has now become integrated, So, a reception and transport services were added to it from the airport to the hotel and from the hotel to Istanbul airport" minister Turhan said regarding the taxi drivers that will transport to the new airport in Istanbul.

“One of the most important things that we have achieved with the launch of the new airport is to give opportunities to operate flights to friendly countries, which we could not provide at Ataturk Airport in the past since our capacity could not allow this.  We were able to solve this problem with the launch of our new airport, as the percentage of flights will increase. The proportion of journeys will increase by 20 percent within 5 years, and thus we have made an important contribution to the economy and tourism in our country. External flights will be separate from internal flights, and we will determine the maximum price for the internal flight ticket" said the minister. 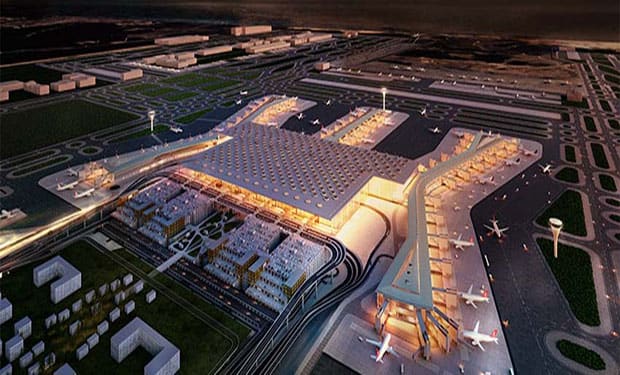 What will happen to Ataturk Airport after the opening of Istanbul's third airport?

"Ataturk Airport will turn into a public park and an exhibition city, and the plan for this conversion process and its implementation will be done by the Ministry of Urbanization and Environment, and the space allocated to us - that is, to the Ministry of Transportation - will be an educational center, but the airport will be used for a year or a year and a half in cargo aviation and private aviation until such time and we will have completed the construction of cargo halls at the new airport" minister Turhan said in response to a question about the fate of Ataturk Airport after the opening of the new Istanbul airport.

In a related context, Turkish newspapers and websites dealt with the transfer process and the first day of operation in headlines, most notably:

The new airport starts its first day with 148 flights

39,800 passengers were transported through it. With the activation of all the operating units in it, Istanbul Airport completed its first day successfully and none of the passengers or the airlines faced any problem. “We operated a total of 148 flights, 92 percent of which are departures“ the General Director of Airlines, Bilal Aksi said.

The airport's transfer process recorded an unprecedented event in the history of global airports, as it became a solid reference for any similar applications in the aviation sector.

Istanbul's new airport has reached an area of 7659 hectares, and it is located in the “Arnavutkoy” area near Duru lake.

The first international flight arrives at Istanbul Airport from Copenhagen

The first plane that entered Istanbul's new airport was coming from Copenhagen Airport, and the Turkish Airlines team at Copenhagen Airport provided information of interest to travelers about the new Istanbul airport and informed them that they would be the passengers of the first flight entering this airport. The first person to check his papers to travel to Istanbul Airport was the Turkmen citizen “Jamal Tanri Prdeva,” who said that he was going to “Akçaabat” and would switch in Istanbul and said that he was eager to see the new Istanbul airport.

How to go to the new Istanbul airport?

Nowadays, many people wonder about the location of the new Istanbul airport, exactly where is the new airport in Istanbul? How do you reach it? This is for fear of missing out on their trips due to traffic congestion at peak hours.

When travelers inquire: Where is Istanbul's third airport located? They can find that Istanbul Airport has been established in a new area far from the congestion of Istanbul's city center. Consequently, it can be reached by private car, taxi, and bus. According to the news reported in the Turkish spokesman Sözcü newspaper, the two easiest ways to go to the airport are the E-5 road and the TEM road.

For example, when going to the airport from the city center in Beşiktaş, the distance via the E5 is 73.7 km, and the cost for a diesel vehicle is approximately 33.16 Turkish liras.

The distance decreases to 66 km when going from the TEM road, and thus the cost is approximately 32.45 Turkish liras with the fees for crossing the roads, but the luckiest areas in reaching the airport are those near it, such as Basaksehir and Kayasehir.

As for the traveler who chooses to go to the airport by taxi, they will pay about 190 Turkish liras when going from the central area as an average rate if he goes via the E-5 road, and the average amount he will pay if going by TEM is 175 Turkish liras.

Luxury buses equipped with luggage compartments have been sorted, transporting passengers to Istanbul Airport from all parts of the city. However, It is expected that these buses will carry 75 thousand passengers per day, and according to the requirements set by the Ministry of Transport, prices will be between 12 and 30 Turkish liras, depending on the length of the line, and children until the age of six will ride for free.

The most intensive airport bus line will be the "Yenikapi - Sirkeci" line towards the airport "Sirkeci-Yenikapı", where the length of this line is 50 km, and 23 buses will provide service, at a rate of one bus every 11 minutes, and the fare of this line will be 18 Turkish liras.

On the other hand, the farthest and most expensive line will be the line starting from the Pendik area in the Asian side, where the length of the road will be 93 km, and 5 buses will operate on this line and the fare for this line will be 30 Turkish liras. 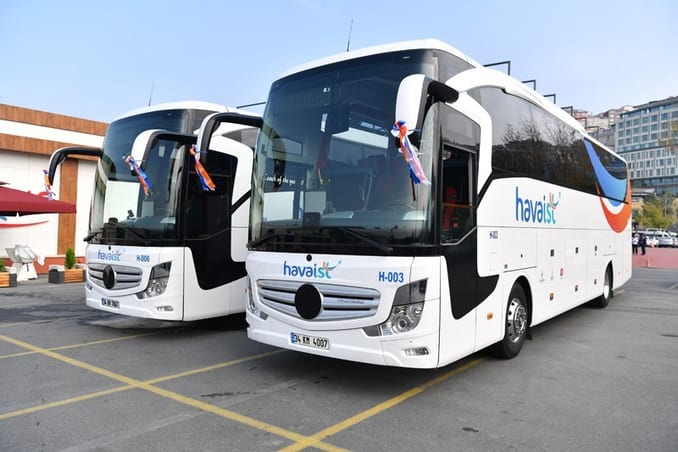 These are the airport bus routes schedules and bus pricing:

According to the statements made by the company "İGA", the parking lots at Istanbul's new airport will continue to provide service to its guests for free until the fifteenth of April 2019, and the parking fees will be as follows:

Istanbul Airport parking prices for minibuses and pick up cars

Turkey: $5 Billion in Tourism Revenues in the First Quarter of 2022