The Most Famous Mosques In Istanbul

Known as the city of minarets, Istanbul is famous for its mosques all around the world. This article is a comprehensive guide for Istanbul's finest and most famous historical mosques.

Aya Sofya Mosque is one of Istanbul's most famous tourist spots, located on the European side of the city, featuring long historical value, dating back to 537 by order of the Roman Emperor Justinian.

Aya Sofia was a church when it was established, but after the Ottoman conquest of Istanbul, it was converted into a mosque by Sultan Mehmet Fatih. During the Turkish Republic, the mosque was transformed into a religious museum with extensive photographs.

Aya Sofya Mosque is a unique art and architectural edifice located in the Sultanahmet district nearby Sultan Ahmet Mosque. It is one of the most prominent examples of Byzantine architecture and Ottoman decoration.

Located nearby the Golden Horn, Sultan Eyup Mosque is situated in Eyup District on the European side of Istanbul, the first mosque to be built after the conquest of Constantinople in 1458, dating back to the beginning of the 19th century.

Outside, the mosque complex houses a separate building, including the tomb of Abu Eyup El Ensari (God bless him), many other graves outside the complex, and some of the possessions of the Prophet Mohammed (peace be upon him) are located outside the mosque.

Here is one of Istanbul's mosques in pictures: 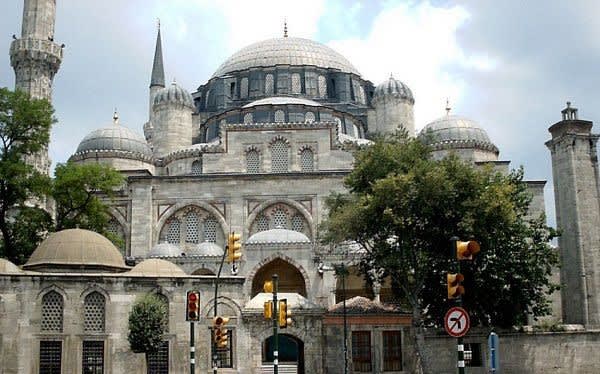 Sanki Yedim Mosque is one of Istanbul's famous mosques, a small mosque located in Istanbul's Fatih district, dating back to the 18th century during the Ottoman Empire. It gained great fame due to its strange name that it became a tourist destination.

The story of the mosque is exciting: there lived in Fatih a person named Hayreddin Efendi, and when he used to walk through markets, whenever he wanted fruit, meat, or candy, he said to himself "as if I ate", and kept the money in a box.

After several years of saving most of his income, money increased little by little until he built a small mosque in his neighbourhood. As the people of the community knew his story, they called the mosque "Sanki Yedim". 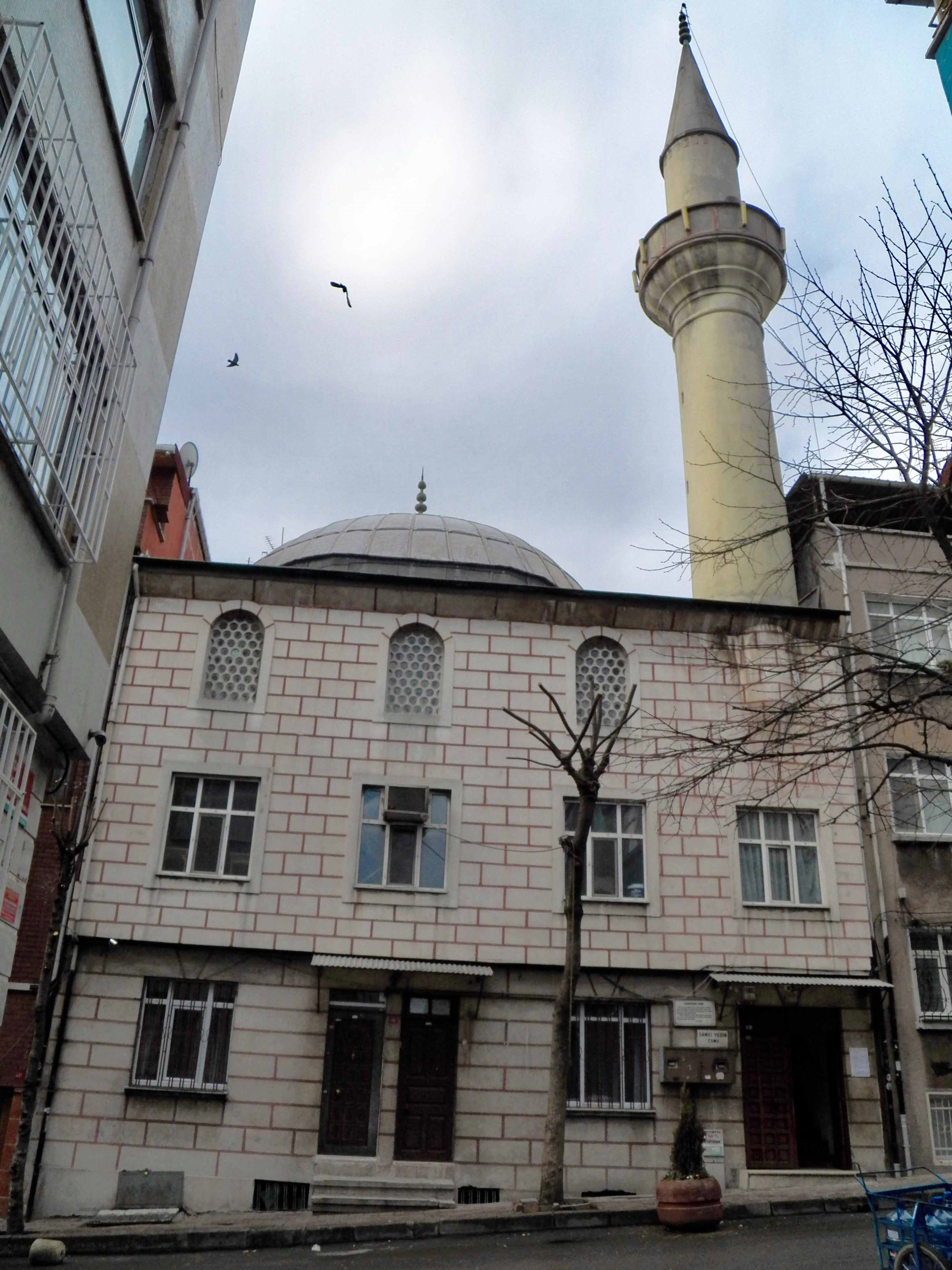 Eminonu New Mosque has a unique location in the heart of Istanbul in Eminonu, with a charming view of the Golden Horn Bay, nearby the Egyptian market. The mosque was built by order of the wife of Ottoman Sultan Murad III in the early 17th century.

Eminonu New Mosque was opened in 1665, after nearly half a century of construction, to be one of Istanbul's most prominent monuments. 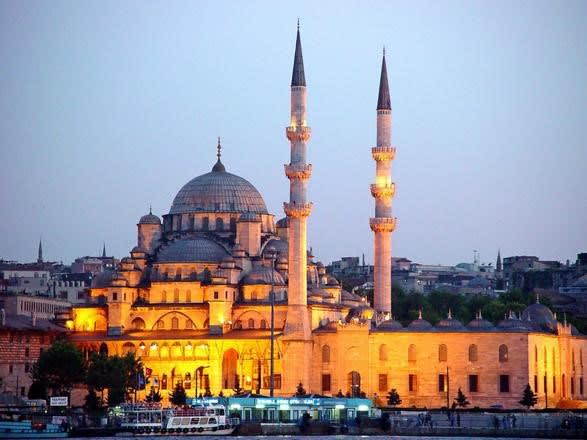 Located in Buyukcekmece on a large area of 700 meters, Sancaklar Mosque features a unique architectural style different from other mosques, built underground, offering worshippers a calm atmosphere away from the chaos of daily life.

Inspired by the idea of the Hira Cave, Sancaklar Mosque was built by Turkish designer Emre Arolat. Being a great model of modern architecture, it ranked first in the World Architecture Festival competition for religious places. 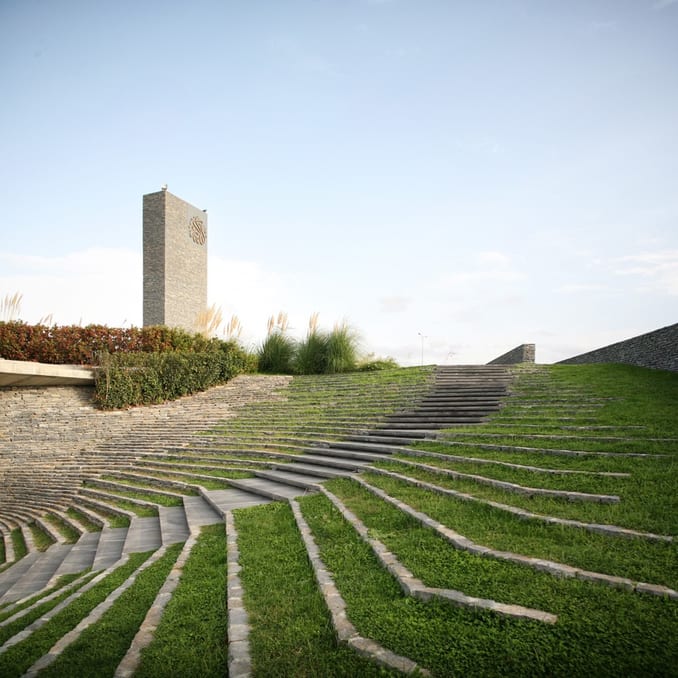 Arab Mosque is the first mosque built by the Arab Muslim army, led by Muslimah Ibn Abdul Malik in 717 AD, located in the Galta district in Beyoglu, in the city centre of Istanbul.

With its Andalusian architecture style, Arab Mosque has a distinctive architectural minaret, transformed from the church bell tower, one of Istanbul's strangest mosque structures. 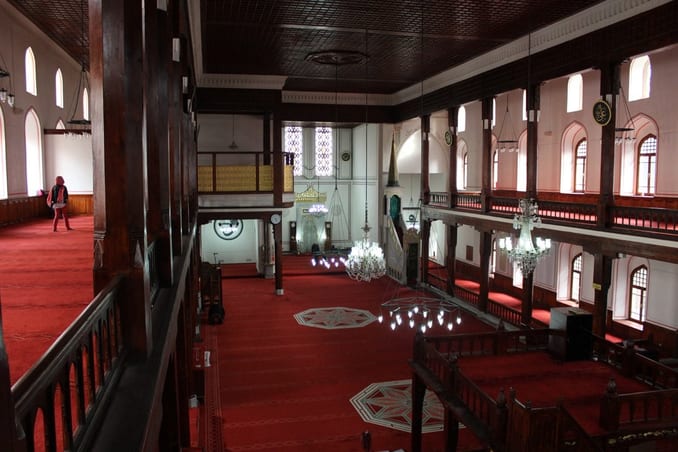 Sultan Ahmet Mosque, known as the Blue Mosque, is one of Istanbul's most prominent historical mosques, located in Sultan Ahmet Square against Aya Sofya Mosque. It was built between 1609 and 1616 by Sultan Ahmed I, and it is famous for its distinctive architecture, one of the most important and largest mosques in the Muslim world.

Sultan Ahmet Mosque features architectural features dating back to Byzantine and Ottoman times and has stunning views of the Sea of Marmara. The mosque, 43 metres high, has a spacious courtyard and more than 200 windows. Its interior walls are decorated with ornate blue tiles. 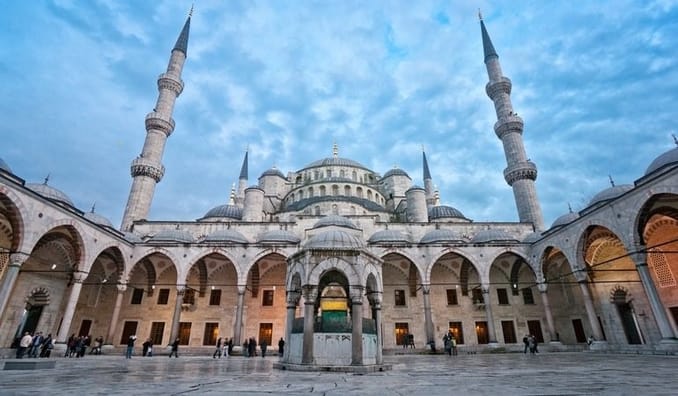 Ortakoy Mosque has direct views of the Bosphorus, giving the mosque more splendour and beauty. The mosque was built by Sultan Abdul Majid in 1853, with solid foundations and pillars, 20 meters deep, to be more durable and protect it from earthquakes.

The mosque was built in the style of Baroque architecture by architect Garabet Balyan, consisting of two main sections, the worship section and another for the Sultan's protocols. It features a dome with ornate, beautiful patterns. 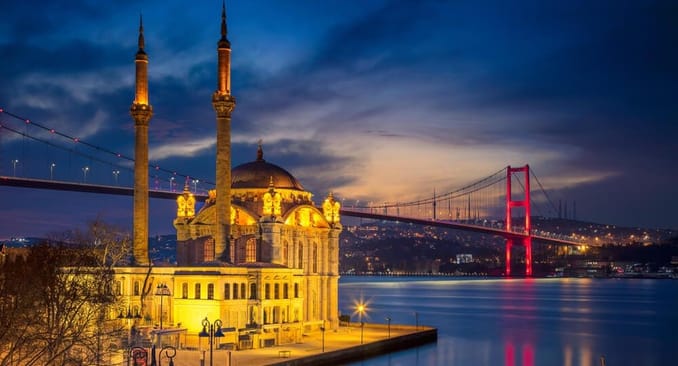 Fatih Mosque is one of Istanbul's largest and most magnificent mosques, attracting tourists from around the world. Before it was converted into a mosque by orders of the Ottoman Sultan Mehmet Fatih in 1470, it was a church in the Byzantine Era. Fatih Mosque is of historical and tourist importance, making it one of the most important religious places, as the mosque has two identical minarets and has a large courtyard surrounded by many columns and arches.

In its southern section is the shrine of Sultan Mehmet Fatih, surrounded by an ornate glass wall, surrounded by walls engraved with Qur'anic verses, and a hadith attributed to the Prophet: "Constantinople will, for sure, be opened, let us bless the prince and the army." 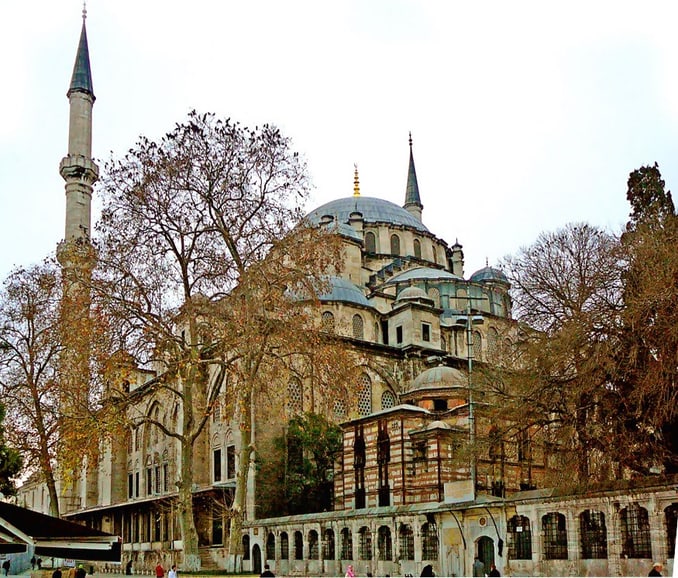 Suleymaniye Mosque was built by architect Sinan, during the reign of Sultan Suleyman Kanuni, from 1557 to 1550, in the style of classical Ottoman architecture.

Suleymaniye Mosque, named after the Sultan he ordered to build, is located in Suleymaniye district, nearby the Bosphorus, one of Istanbul's most famous mosques and one of the most important tourist destinations. It has four minarets, as Sultan Suleyman was the fourth Sultan among the sultans of the Ottoman Empire after the conquest of Istanbul. The minarets have ten balconies indicating Sultan Suleyman X ranking among the sultans of the Ottoman Empire.

The mosque has a featured construction that reflects the echo of sounds inside it, as architect Sinan put empty cubes from the inside around the perimeter of the dome and at different points of the mosque inside.

According to some accounts, while Sinan Pasha spent his time and effort building this mosque, some jealous people reported to Sultan Suleyman that Sinan Pasha has hookah inside the mosque. The Sultan became angry and went himself to see what was happening, but later discovered that Sinan Pasha was blowing hookah without tobacco, only to hear the sound of the water crackling inside the hookah in the mosque.

Prince Cihangir Mosque has a distinctive place in the Istanbul Mosque Guide, located on one of the magnificent hills Beoğlu near the Bosphorus, built by architect Sinan in the 16th century. 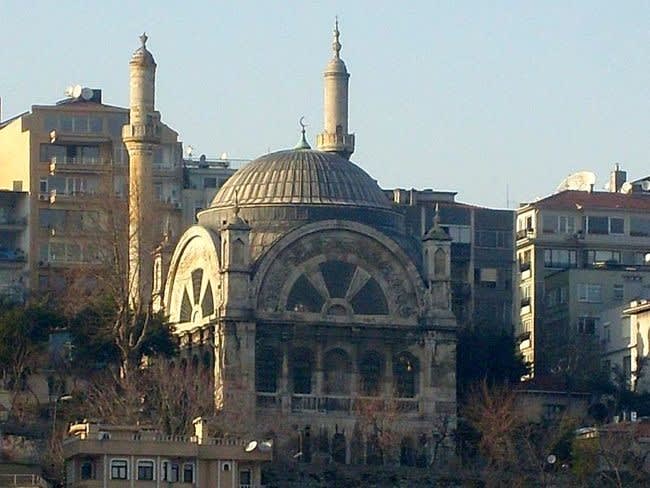 Hirka-I Serif Mosque is located in Fatih, and it got its name because this mosque has the cloak of the Prophet, which Sultan Salim I brought to Istanbul in 1516 and kept in this mosque.

The mosque construction features the Arabic style, where you can see the Arabic writings adorning the mosque from inside, with a broad dome in the centre. 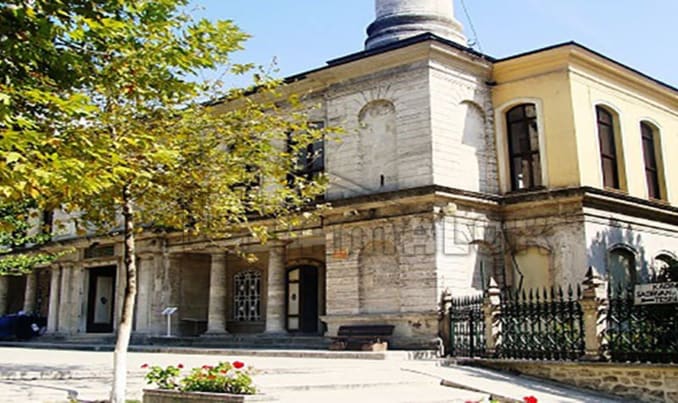 The mosque was built by orders of Rustem Pasha, the husband of Sultan Suleyman Kanuni, known as Sultan Mihrimah, and was inaugurated for worship in 1561. 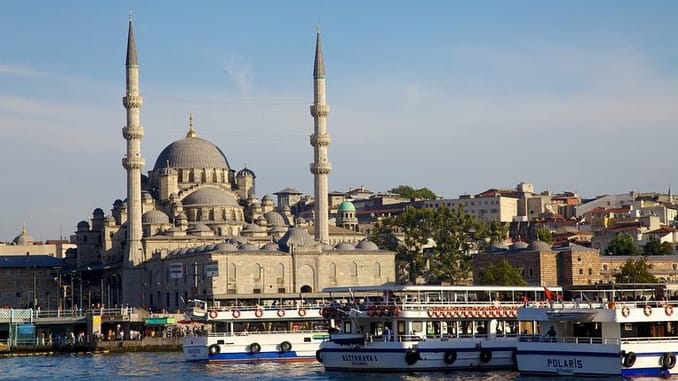 Located in Fatih on the European side of Istanbul, Sehzade Mosque was built during the Ottoman Empire in 1548, ordered by Sultan Suleyman Kanuni to commemorate his late eldest son Shahzad Mohammed, who died at the age of 21.

The strategic location of the mosque made it one of the most important mosques in Turkey, Istanbul; it is located in a spot overlooking the historic Istanbul Peninsula. Its construction is majestic, featuring Ottoman architecture. It is surrounded by a gallery and 12 columns, holding 16 domes scattered throughout the mosque. 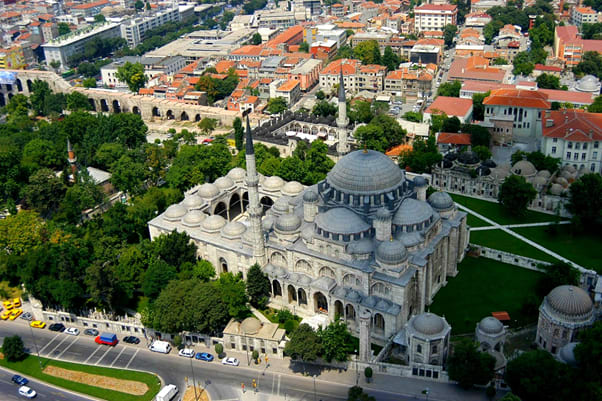 Architect Nigogayos Balyan took over the construction of the Dolmabahce Mosque by order of the Ottoman Sultan Abdul Majid. That period was influenced by western architectural styles blended with the touches of Ottoman architecture. Dolmabahce Mosque is the ideal model that reflects the features of that time to which the mosque belongs. 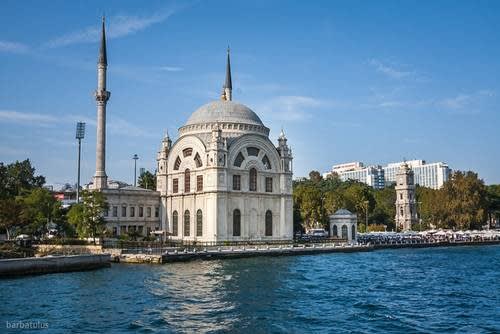